C, and during the 18th dynasty it forms the exclusive decoration on the walls of the royal burial chamber. In Ramesside time 19th and 20th dynasty , it still belongs to the standard decoration of royal tombs, besides other Books of the Netherworld. The only non-royal person in the New Kingdom who has used an Amduat for his tomb is the vizier highest official Useramun who was in office under Hatshepsut and Tuthmosis III. 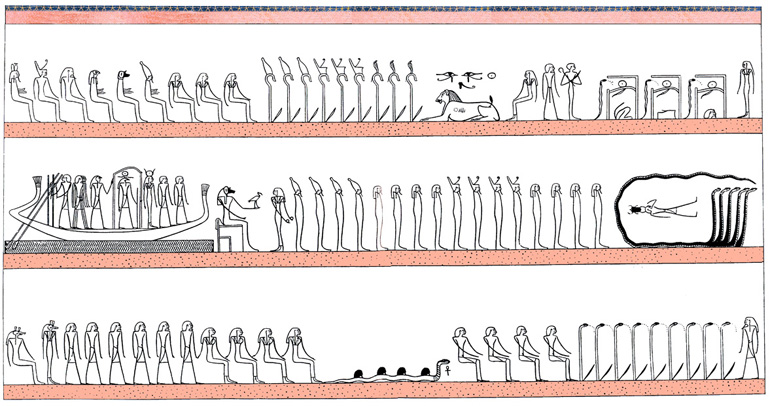 After the end of the New Kingdom B. C , the Amduat was copied on papyri and on coffins and became now available for priests and their relatives. It was still prominent in tombs of the Late Period and on royal or non-royal sarcophagi until the Ptolemaic Period. Quotations from it are still found in the Roman Period. Whereas the Book of the Dead is composed of individual spells with no fixed sequence, the Books of the Netherworld follow a strict pattern.

The earlier compositions Amduat and Book of Gates are divided into twelve sections which correspond to the twelve hours of the night, text and pictures always forming a unity. Thus for the first time in history, the world beyond death is described here in word and image. In addition to the long, illustrated version of the Amduat, a short version, without illustrations, is found in the tombs and on papyri. It is a sort of abstract or summary, listing important names and adding further remarks on the usefulness of the book.

Only Tuthmosis III, in the upper pillared hall of his tomb, adds deities from the Amduat to this catalogue, enemies excluded. Before each figure is a short label name? Figures and text are drawn in black ink. Behind these four figures are eight standing female figures each of whom has a cobra in the form of the hieroglyph "d" resting on her shoulder.

As was the case with the male figures, each of these figures is identified by a short text. In register C there is a representation of a bark being towed-to the right- by six bearded male figures who face forwards.

Before them are three female figures who are also towing the boat but who turn their heads towards the bark. Beneath the feet of the six male figures is a large snake. The front part of the boat, which is here preserved, is high-prowed. Standing on the boat are two small figures behind whom stands a ram-headed god who stands beneath a long snake whose body forms a sort of canopy over him.

There is a text, written in black above all these figures. At the right end are the scarab and figures drawn. Fragment B : appears to continue the vignette of fragment A but the two pieces do no join. The right end of B continues the scene represented on A. On register A there is the end of a text written in red.

Journey to eternal life of Pharaoh

In register B there are two women with cobras resting upon their shoulders. In C there is the rear part of the boat with three deities standing on the deck. In D there is part of figure holding an oar followed by three female figures who hold "Was"-scepters. In the place marked E in the drawing on card 5 there are the partial remains of two columns of text written in red. F is the remains of a line of text written in black while G is 2 columns of black text.

The Egyptian Amduat – The Book of the Hidden Chamber

Egypt: The Major Egyptian Books of the Underworld

V is some circular object. Many of the figures on fragment B , such as the crowns and serpent below T, the two figures wearing the White Crowns J , and the female figures seated upon the cobras H, and S appear to belong to representations of the Eleventh Hour of the "Amduat" and it seems probable that the left part of the fragment B is decorated with a representation of that hour.

Condition: Many gaps and tears. The papyrus is darkened and there is, especially on B , black incrustation.